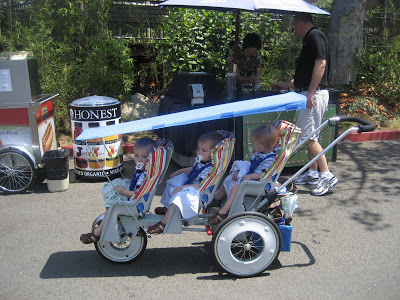 A couple of weeks ago we made a last-minute decision to take a road trip to California. This was completely out of our norm, or norm as we know it. We had nothing better to do, and it’s been so darn hot here in Vegas. Why not??? We set out after work on Friday and headed towards San Diego. We thought we would take the boys to the zoo and maybe hit the beach. We decided to wait on Sea World until the babies are a little older. I’m not sure they have the patience to sit through the shows, and I don’t have the patience to corral them at the water park. This was our first road trip with the trio. Driving across the desert with 3 toddlers and 2 older-and-easily-bored boys is not all that fun. The last couple of hours on the road someone was crying. It took us about 2 hours longer than it should have, but we made it regardless.

I think it was around 11:00 when we finally made it to our hotel room. No less than two minutes after we got to our room, all you-know-what broke loose. Babies gone wild!!! They were climbing on the furniture, taking the glass off the tables, standing in the windows, and just running all over the place squealing the whole time. We quickly went into baby-proofer mode, as much as possible at least. It took awhile to wind them down, but we finally got them to go to sleep. That was also a little challenging. We had booked 2 adjoining rooms, and the hotel, which was completely sold out, messed up and gave us rooms on different floors. Oops. They somehow scrounged us up a mini-suite and brought us 3 port-a-cribs. We made it work. I wish I had taken a picture of Liam crammed in that little bed. He likes to sleep all stretched out and he just didn’t fit, poor guy! Noah slept on the couch, and Eli had a roll-away bed. A big highlight of the trip was our ridiculously priced room-service breakfasts. Noah & Eli just love staying in a hotel, and immediately look for the room service menu. The babies thought it was pretty cool to sit around the coffee table and eat instead of being confined to high chairs. (Of course we were missing Morrie & Beckham when we had to clean up the floor.)
Saturday morning we set out for the San Diego Zoo. It was a beautiful day. We took the Runabout stroller since we could hitch it to the back of the car. It and the babies ended up being just as big of an attraction as the animals!

Would you believe that 5 minutes through the gate we ran into 2 other sets of triplets? Crazy! We heard there was anther set there too in the choo choo wagon, but we didn’t run into them face to face. This is the first set we saw, more fraternal BBBs! 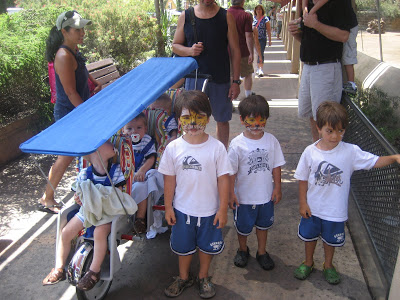 We never let the babies out of the stroller until we got to the petting zoo. Big mistake. We know better than to let them out!!! Of course they didn’t want back in. Aside from that one melt-down, they were perfect angels the entire day. They seemed to enjoy taking in all the sights. However, the first animal they noticeably took interest in (by pointing) was a pigeon. Go figure. We have hundreds of those right in our own neighborhood! 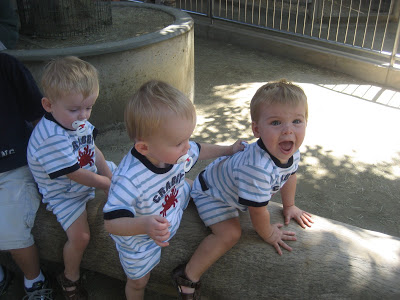 Noah was a little worn out from all the walking by the time we got to the petting zoo. He probably would have taken a ride in the stroller if he could have, poor guy. 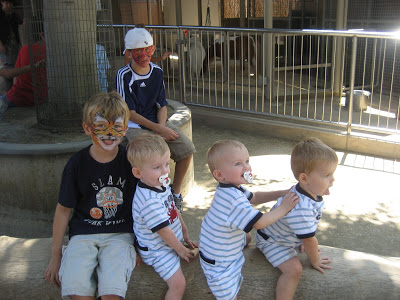 My tribal warrior and tiger…. 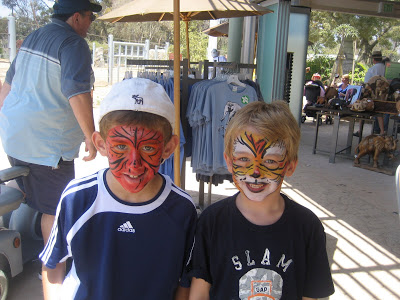 The zoo was a full day activity and the babies were wiped out. Matt & I were pretty wiped out ourselves from pushing the stroller up all those hills! Whew, what a work-out! We drove the big boys by seal beach and let them walk on the sand a few minutes then we called it a day. We didn’t dare try to go to a restaurant at that point so we opted for a room-service dinner too.
Sunday was our designated beach day, so after breakfast we packed up all of our things, checked out of the hotel, and set out on our way. We decided to drive a bit before settling on our destination beach. The babies are used to taking a long morning nap so we felt it was in our best interest to let them cat-nap in the car. We stopped at Newport Beach. I want to live in Newport Beach! It is beautiful… nothing but sand and water…. the cleanest beach I’ve ever seen. Everyone had a ball. Only one problem… whoever said that the RA strollers work well on the beach must have a friend in Hercules. 75+ pounds of babies makes the RA stroller SINK into the sand. We weren’t going anywhere fast. If I wasn’t reminded how out-of-shape I was at the zoo, I think it clicked here. Matt & the big boys went and found us a spot, dropped our gear and were headed back to get me and the trio. By the time they turned around I had a surfer dude offer to help pull them down, and I wasn’t going to turn him away! Noah and Eli instantly went to the water and stayed there. We parked the little boys on some blankets and tried to feed them lunch before doing anything else. I’m sure they ate quite a bit of sand too. It took them a few minutes to get comfortable with the ocean, but once they did it was hard to get them out. We ran zone defense the rest of the afternoon. Luke loved the waves and wanted to stay in the water. Aidan kept running back to the beach (of course the opposite direction). Liam was the most cautious, and he ran both directions. Lots of exercise in this weekend!
Here are a few shots from the day. Noah & Eli were too busy to be photographed… better luck next time, I guess. I actually had good intentions to get a picture of all 5 boys, but once they hit the water I couldn’t man the camera. Lesson learned…. take the picture first! 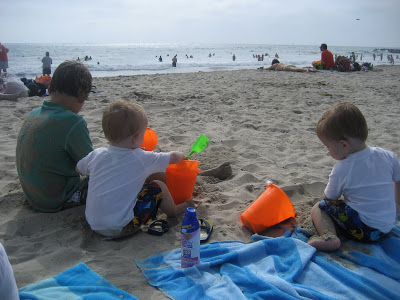 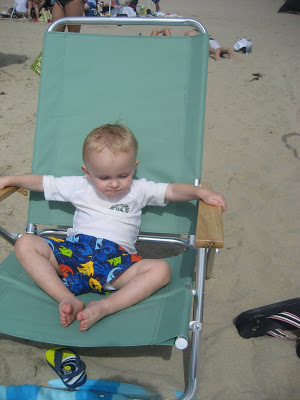 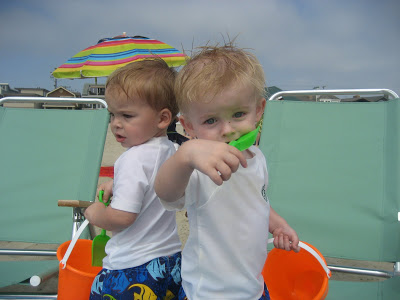 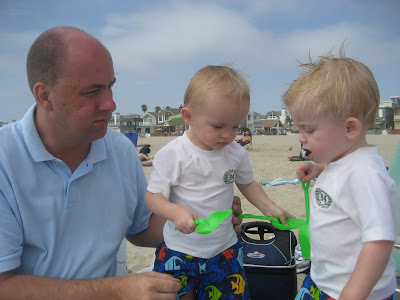 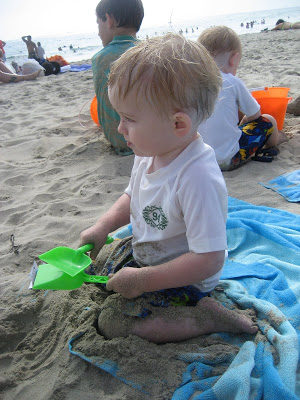 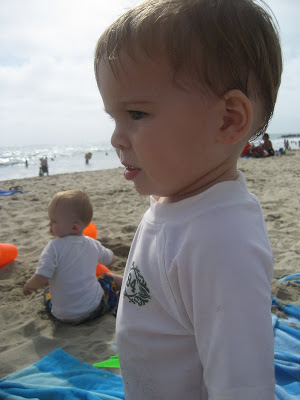 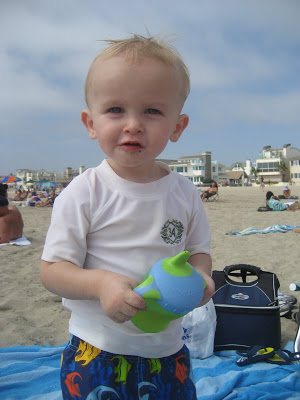 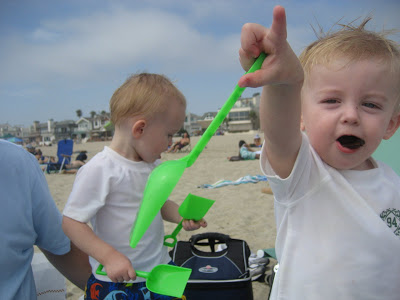 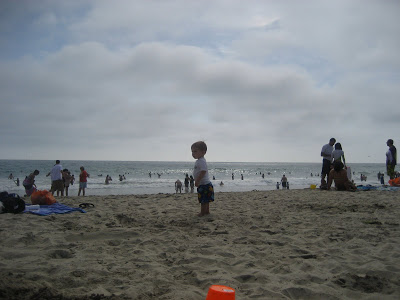 We didn’t leave the beach until after 6:00. The ride home was much easier…. all the boys slept, which was good since Noah & Eli had school the next morning. 🙂 Overall the trip was a success. It was a nice break if nothing else!