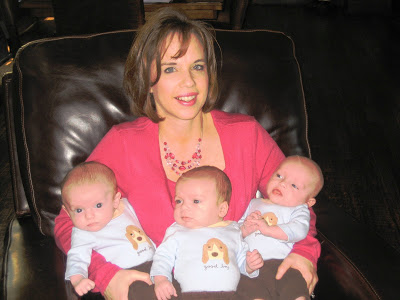 My good friend Kerri (whom I’ve known since elementary school) and her 2 kiddos, Hailey and Holt, came to visit us last week. They are officially our very FIRST visitors since we’ve been here in Cali! The timing worked out perfectly, in that it fell during N&E’s summer break from school. Hailey is the same age as Eli, and Holt is almost 4… about 16 months older than the trio. We decided to make this our summer ‘STAYCATION’, seems how we are fortunate enough to live in a ‘vacation’ destination.

Kerri also came to stay with us for a few days when the littles were just 2 months old, back when we were in Austin, Tx. They’ve grown a bit… (the littles, that is…)

We were lucky enough to have our friends here with us for 6 days and 5 nights, so I’ll be breaking up the posts by day in order to capture all of the fun. Fortunately Kerri brought her camera, and she was nice enough to share her pics, seems how I still have not been able to replace mine!
They arrived last Wednesday, and their flight didn’t get in until almost 3:00pm. We were so excited! I put the littles down for a nap early so that we could pick them up on time, and in good spirits. Aidan slept like a rock for his usual hour, or so. Luke & Liam… not so much. They partied up in their cribs until I picked them back up to load into the car for our trip to the airport. Matt was working, so I was picking them up solo in the Suburban. My particular Suburban has a bench-type seat in the front, with a 3rd seat belt hidden under the center console. We never use it, but in this instance, we had no choice. Can you picture it… 2 adults + 7 kids in 1 vehicle? Here’s a shot of what my car looked like just minutes after loading up. (Noah is in the front seat with Kerri & I, and it’s Luke that is hiding from the camera.)

How cute is Miss Hailey in the middle of all those BOYS??? I’m not sure she knew what she was in for at this point. All the kids seemed to get along great right from the start!Since it was already late afternoon, we didn’t have much planned. We had to make a quick trip by the house to unload Kerri’s (52 pound) suitcase, and replace it with a form of triplet transportation. My initial thought was to drive them down the PCH to scope out the various beaches around us, and stop for ice cream to tide us over until dinner. By the time we got back on the road and to our ice cream destination, I realized that it was fast approaching (or past) the dinner hour back in Texas. Kerri and I decided to be brave and take all 7 kids inside the restaurant and actually attempt to sit down at a table for dinner. I was AFRAID…. very AFRAID, of how the littles might act… 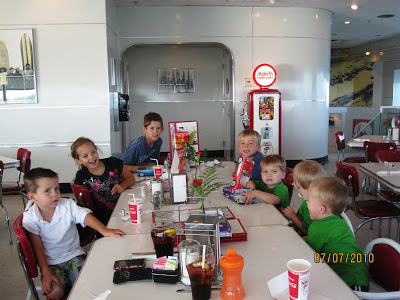 I was pleasantly surprised at how GOOD they were! They actually sat in high chairs and behaved, go figure! It might have had something to do with the fact that they hadn’t eaten since lunch, as we went straight to the airport after naps. That, or they were trying to break Kerri in to the chaos easy. Give them time… 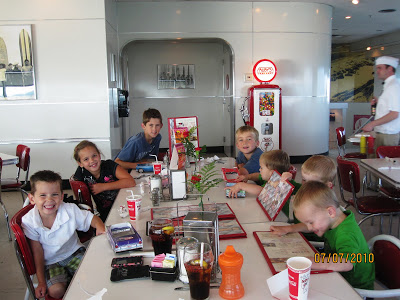 We hadn’t even sat down at our table when Kerri got to experience her very first earthquake! The restaurant we went to was on the end of a very long pier in Huntington Beach. Probably not the best place to be, during an earthquake! We were swaying back and forth when the waitress asked… “are we earthquake-ing?”. It wasn’t 20 seconds after that that Matt called me on my phone asking what Kerri thought about it. She actually thought it was ‘cool’, just like I did the first few times it happened. It’s a new thing for us Texans! It was a 5.4, centered in Borrego Springs, CA… wherever that is! 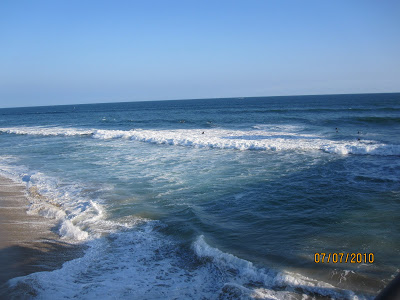 Matt met us at the restaurant just as we were finishing up. Noah ended up going back to his car with him. He wasn’t all that thrilled about riding up front sandwiched between Kerri and I. Stay tuned… he later will come to find that it was quite a comfortable spot, indeed.Kerri got a cute shot of all the kids on the pier before we made our way back down to our cars. Luke’s still not happy. I guess next time he should take his nap. Holt is still all smiles, hangin’ just fine with the big boys, and our lone girl Hailey is holding her own. Good times! 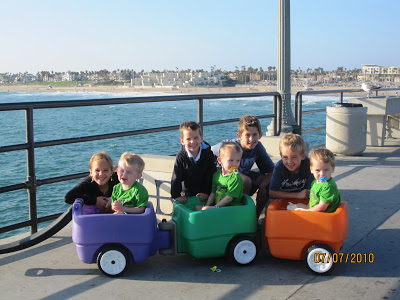 We loaded back up and drove along the coast, in order to pick out ‘our’ beach for Thursday. (Thursday was our ‘beach day’.) I drove them from Huntington Beach up to Laguna Beach, and we decided on a spot in between…. Corona Del Mar. Once this was decided, we opted to head back home. By this time all the kids were starting to get a bit restless, as expected since it was getting late. We had some play time at the house, then got all the kids settled for their first ‘sleep-over’. The 4 big kiddos all slept in N&E’s room. Holt had his own twin-sized inflatable mattress, Eli took the floor next to him in his sleeping bag, Hailey had E’s bed, and Noah kept his own on the top bunk. The room was full, to say the least, but they enjoyed it. Before we knew it, day 1 had come to an end. Tune in tomorrow for Day 2 pics from the beach!