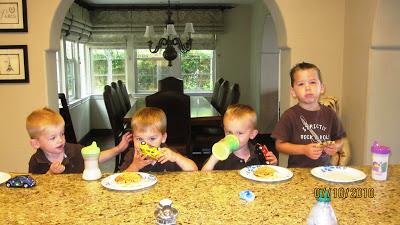 We had a few things planned for Sunday. All were close by (meaning no long distance driving with 10 people in one car… once was enough!). We were headed to our favorite little cafe down on the beach for breakfast. However, after our Saturday craziness in the Tonga Lei Room with the screeching monkeys and mocking littles, Matt decided that he would stay home with the trio so that Kerri could maybe enjoy ONE meal in peace. I didn’t argue with him this time!

While Kerri and I were getting ready, Matt fed the littles (and Holt) breakfast. I came down to find the four of them sitting at the bar like this…

Not a flattering shot of any of them, but I wanted to point out that they were all dressed very similarly… by sheer coincidence! All four of them had on brown shirts with camouflage shorts. I came down and called them my ‘quads’! (Lord help me…)

Kerri, Noah, Eli, Hailey, Holt, and myself headed out for breakfast. (Yes, Holt was going to get to eat twice…). We had about an hour wait, just like we did on Father’s Day. This is the one place where the kids WANT there to be a long wait. We let them four of them play in the sand and surf while we waited on our table. They had a blast. They were taking turns burying each other’s legs. Cheap, easy entertainment! 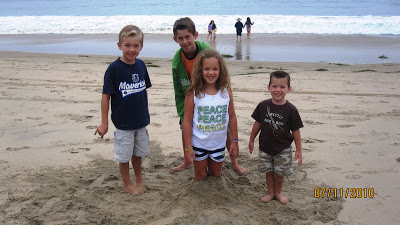 This shot is my favorite… 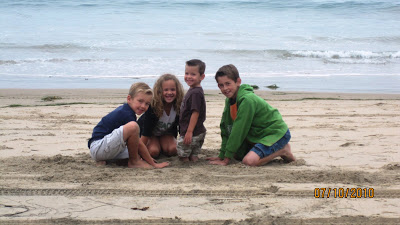 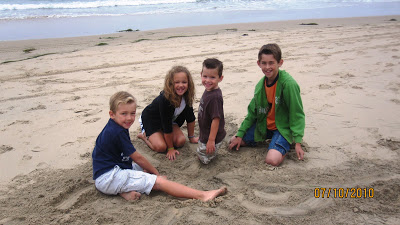 We finally made it to our table and ate ourselves silly. YUM! Afterwards we headed back to the house to pick up Matt and the littles. We had a boat to catch! We didn’t have much time, but we managed to pack some PB&J’s and a few other snacks. We rented a little boat to tool around on in Balboa Island.

Here’s a shot of all the kids (except for Luke). They were waiting on our boat. See what I mean about the matching outfits??? 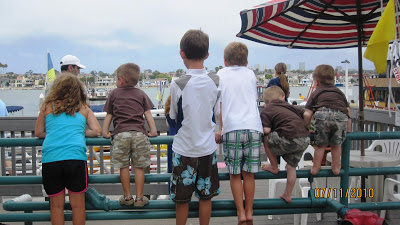 A few shots from our excursion… 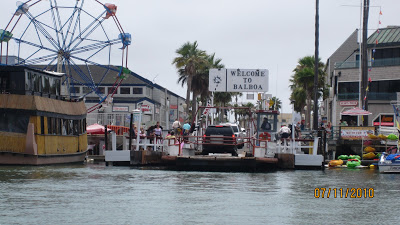 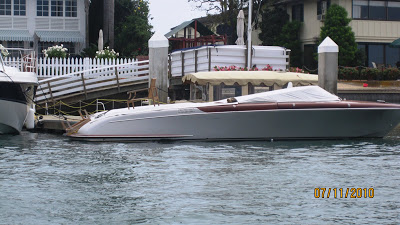 Take a closer look…. Just how CUTE is this guy??? We actually saw several seals that day. Love them!

The boat ride ended up being more fun for the adults than the kids. The littles enjoyed themselves, but they ate the entire time we were out. The bigger kids grew tired of it after a few minutes. After that they wanted to go back to the beach, complained about their life jackets, etc. Go figure. We had rented the boat for 2 hours, but ended up taking it in a few minutes early. 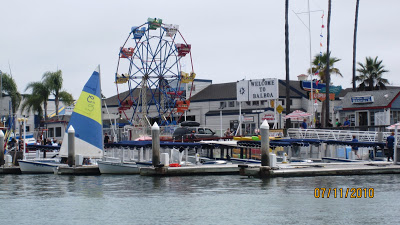 Once we got off the boat, we had planned to walk around Balboa Island. Those plans changed as well. The big kids really wanted to go back to the beach, so we walked a few feet and plopped ourselves down on the sand… again! The sun had come out and it was really warm and beautiful. It was nice to sit and chill for awhile, and the kids needed to burn off some energy. I overheard a family talking next to us. They had seen the choo-choo wagon and were looking at the littles. All of a sudden I heard… “Look… triplets!” from one voice. Then I heard… “Mom… there are FOUR of them!!!”. LOL. I told you. The ‘mom’ had to come over and ask me about them. She asked if we had triplets, or two sets of twins. I guess Holt and Aidan were twins since there’s not much difference in weight between the two of them! So funny to listen to the reaction of people! Never dull.

Here’s a quick shot of Kerri with her kiddos from the afternoon beach trip. 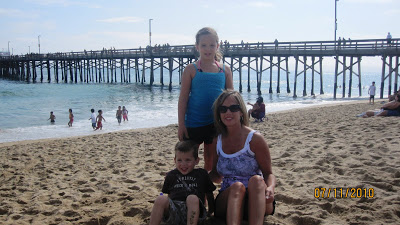 We gave them until 4:30 or 5:00 to play, then we packed up and headed home to make dinner. This was their last night with us and we had planned to cook outside. Unfortunately, our staycation was coming to an end. It took so long to get here, yet was going by SO FAST!
One more day to go!