Saturday was our ‘down’ day, so we didn’t really have firm plans. We had talked about taking a drive up to Hollywood so that Kerri could get a picture of the ‘Hollywood’ sign in the hills. It seemed like a relaxing thing to do coming off of a full day at Disneyland. Matt and I have been to Hollywood before, but not since we’ve been California residents, and not with the kids. It’s about a 45 minute to an hour drive, depending on traffic, but we figured why not??? We opted to take just ONE car this time since we were sight-seeing. Didn’t sound much fun with two cars, especially when we really didn’t know where we were going. Ever watch the Beverly Hillbillies? That was us…. only in a Suburban. We piled all TEN of us in the car. Matt, Kerri, and myself rode in the front row like Uncle Jed, Granny, and Ellie Mae. (I rode in the middle.) Those of you that know me well, know that I am not a good front-seat person unless I am driving. Matt says I have ‘control issues’… haha… actually it’s a case of jumpiness from a car accident, but either way, this was a big step for me. Our four little people were in their car seats. We initially put Eli in the back row, between Luke and Liam, and then double-buckled Noah and Hailey in the (larger) middle row between Holt and Aidan. Noah is about as wide as a standard ruler, so they had plenty of room. The seat belt was a bit awkward, but other than that they were fine.

We were on the road all of ten minutes before the ‘are we almost there?’ questions started. Soon after the questions started, Luke and Liam were smacking Eli on the head and pulling his hair. Noah and Hailey were whining that their backs were hurting because they had to ride double-buckled for fourteen hours. Holt needed to go potty. I’m sure something was going on with Aidan too, I just can’t remember at this point. It’s contagious! I looked at Matt and told him that we probably should stop somewhere for lunch before trying to do any sight-seeing. Why did I think this would be relaxing? Poor Kerri…

We stopped at a nice restaurant right on Malibu pier. The kids were happy to finally be out of the car, and by this point everyone was hungry. We ended up getting their largest booth, which to us sounded perfect (you know… so we could sandwich in all of the kids). Fortunately for us, this large booth was on the opposite side of the bar, in its own little room, so there weren’t any other tables around for us to disturb. The doors/walls were opened up so we had a nice view of the ocean and pier. This was a HUGE booth, and the entire table top was a lazy susan… very cool. We were greeted immediately by our server, and she welcomed us to the “Tonga Lei Room”. She explained to us that there was a button right behind where I was sitting that played nature sounds, etc. I made a very fatal mistake, and pushed it. NATURE SOUNDS my @$$!!! The lights started flashing to the rhythm of bongo drums, screeching monkeys, and I don’t know what all else. This explains why this room is separate from the more formal, restaurant side. It was LOUD and OBNOXIOUS (in a FUN way)… the kids LOVED it. They loved it so much that one by one they kept climbing over people to hit the button behind me… over and over and over and OVER, again. The big kids thought it was funny so of course they were telling the littles to ‘push it again’. Non-stop bongo music, flashing lights, and screeching monkeys, amidst the laughter of 7 children (and stress of 3 adults). I can still hear the boom-chicka-boom-chicka-boom-chicka-boom-boom-boom beating in my head as I type. At one point Matt took 2 of the littles on a ‘walk’ to calm them down. He came back with little cars for each of them to play with, which may have helped for a minute or two, before it all started up again. We ordered Kerri one of their gigantic signature fruity drinks… she’s probably glad. I warned her we didn’t go ‘out’ much… now she ‘gets it’! Unfortunately we didn’t get any pictures of the restaurant or our table. I don’t know WHY!?! The food was amazing, despite our chaotic environment. At least we burned some calories.

Kerri did manage to get a picture of Holt and Hailey outside the restaurant. What a beautiful day!

We ‘loaded up the truck’ again and set out in hopes of finding the Hollywood sign. This time Hailey wanted to sit in the very back, which left Noah and Eli to double-buckle (oh, boy…). Since the kids had burned off some energy during lunch they were relatively quiet for a few minutes. (I said a FEW minutes.) After that the car went NUTSO again. Aidan kept dropping his car for Noah or Eli to pick back up. Liam decided it would be fun to throw his car and hit Noah in the back of the head with it. Holt was THIRSTY. Noah was ‘touching’ Eli, and Hailey was finding controlling the two in the very back wasn’t all that fun either. Noah’s back was ‘hurting’ from riding double-buckled for thirty-two and a half hours… here we go again. Luckily we were close.

“When are we going to be in Hollywood?”

“I can’t believe I have to ride double-buckled this long… my shoulder hurts and my back is broken!”

The entire 3rd row is crying…

Eli and Noah are slugging each other

Finally we had the Hollywood hills in sight, now we just needed to find the perfect place to take a picture. We drove up and down Hollywood Blvd trying to find the perfect place. Matt ducked in to a fast food restaurant drive-thru and ordered Holt his Sprite. He took one sip and was happy (1 out of 7 isn’t bad). We found the walk of fame… boy do they ever glamorize it on TV. It’s really not pretty to look at. In fact, part of it is in front of a used car lot. The kids kept asking when we were going to be in Hollywood. We kept trying to explain that this WAS Hollywood, but they weren’t buying it. Like I said, it looks a lot different on TV! Holt insisted that we were not in Hollywood. “This is a restaurant… that served fries and hamburgers! Hollywood is not a restaurant with fries and hamburgers!” (Holt is a total crack-up… love him!) “Where’s my Sprite?” There was no way we were going to get out, given the looks of where we were, and the moods of our short people. I was frantically googling where the best place to take a picture of the Hollywood sign was, and would you believe it was right by the fast food joint where we bought the Sprite? Figures. Our Hollywood trip was not working out all that well. Here’s the best Kerri could do, lol… 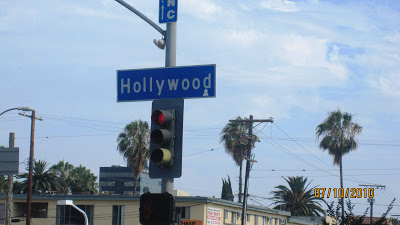 The car was in such a state I’m not sure any of us knew what we were doing or what we were seeing. We were melting down… and fast… and there was no option but to drive another hour to get back home. Matt looked at me and said that we needed to get these kids OUT of the CAR. We ditched Hollywood. No Rodeo Drive, no picture of the sign, no Brad Pitt… just a Sprite from a hamburger place ‘not’ in Hollywood.

“Can we get OUT???”
“When are we going to be in Hollywood?”
“Can I move back up to the middle row?”
“Where’s his blanket?”
“Aidan threw his stupid car again and I’m NOT picking it up!”
Crying…
“I didn’t even get to see the Hollywood sign… all I saw was the letter ‘T’“
(What?)
“I need to go POTTY BAAAAAADDDDDD!”
“I really wanted to see the Hollywood sign.”
“I only saw the letter ‘T’!”
(Huh?)
Kerri finally figured out what the letter ‘T’ comment was referencing. There is clearly no ‘T’ in the word Hollywood. My sweet Eli, who obviously needs to pay more attention in church, had seen a huge CROSS at the top of one of the hills. I am still laughing at that one to this day. (Sorry, Jesus!) Leave it to Eli to provide some comic relief.

We had realized that Hollywood was not the place to take kids, and taking 7 kids on an all-day excursion in a car coming off a full day at Disneyland, was not all that smart. Oh, well. Matt saved the day though. He drove straight to Santa Monica Pier. Moods quickly changed in our car once the kids saw the big ferris wheel. We parked in the parking garage, unloaded the choo-choo wagon, changed diapers, loaded up the littles, grabbed the diaper bag, put jackets on, and set out to to burn off more energy. We rounded the corner in the garage only to find it raining. RAIN? Are you kidding me? Where did that come from??? Are we being punked? Where’s Ashton??? Now what??? We looked at each other and knew there was no way we were getting out of this one. Luckily it turned out to be a freak shower, and it ended almost as quickly as it started. Whew! The first thing we had to do was find a bathroom for our ever-so-patient Holt. The first one we came to happened to be in the building with the merry-go-round. The line was LONG, but we found ways to kill the time… 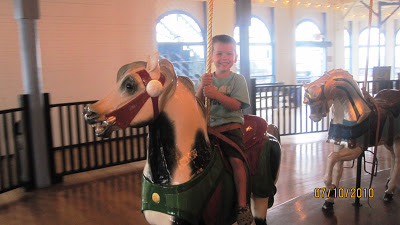 We hit the midway next. We let the kids choose 2 rides each. Despite the rain, the pier was still crowded, and the lines were long. Our trio was attracting quite a bit of attention, as usual. It was chilly, but the kids didn’t care. You would think that they would be over riding rides after Disneyland… NOT! 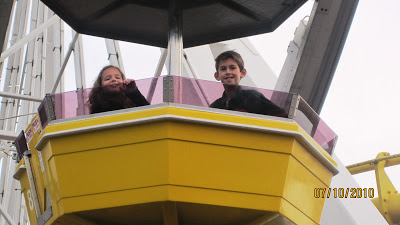 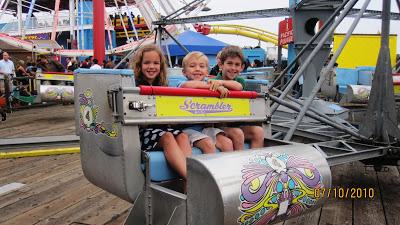 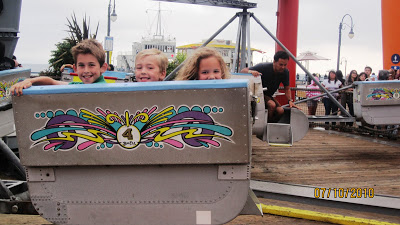 We had planned to get home in time to cook fajitas out on the grill, but our change in plans resulted in us having churros and funnel cakes for dinner. We did stop at Subway on the way home, but more sugar was consumed than anything else. (I found the littles sandwiches on the floor of the car when we got back home, along with a full bag of Fritos.) We had happy kids again! 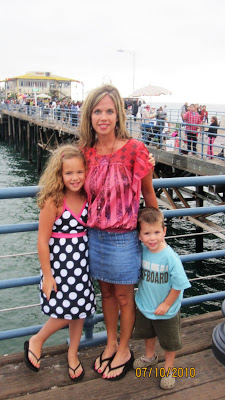 So, after a long day in the car, a few melt-downs, (and making one last stop on the side of the road for my buddy Holt) we headed home. All the little kids fell asleep on the ride back, as they should have… it was well past their bed time. We put everyone to bed as soon as we got home. We adults were exhausted! WHAT A DAY. We apologized to Kerri for giving her such a flop of a tour of Hollywood. BUT… it gave us something to do, and definitely some memories and stories to tell!

To this day, Holt insists that we never made it to Hollywood. Hollywood is NOT a restaurant.
At least he got his Sprite.