On Sunday, we woke up to a beautiful day here in sunny California. We decided to venture out for a walk around one of the beaches. Eli chose the location this time… Balboa Island. (The boys love to walk around Balboa because not only do they get to see all the boats, the beach, marine life, etc., they get to ride scooters and usually end up with a frozen chocolate banana.) We loaded up the car and hit the road around 10:00am. We had to make a quick stop at Target to exchange N&E’s rash guard shirts, other than that we were on our way. Our destination was no more than 15 minutes away, so we would still get there with plenty of time for a walk, a quick splash in the ocean, and even lunch, before nap time. So we thought…

Remember, we are still rookie Californians. This was our first warm holiday weekend, and quite frankly we weren’t really expecting what we found. I honestly hadn’t even thought about people taking vacations on the long holiday weekend. Friends… Balboa Island is NOT the place for locals to go on a holiday weekend. There was absolutely NO parking anywhere to be found. We circled around all the neighboring streets, all the public lots, got sandwiched on a one-way street in the line for the ferry, etc. At 12:30 we gave up and aborted Balboa Island. (Yes… I said 12:30… 2 1/2 hours after we left the house.) We were all STARVING, not to mention it was already almost nap time. I ran into a Subway, and after standing in a line out the door (crazy!!) for 30 minutes, we at least had food. Car food… while we searched for a place to park at our next beach of choice. We finally found a parking space after another 30 minutes or so.

There was no way we could NOT go to the beach. ‘BEACH’ is a well-used word these days by the trio… right up there with ‘BUS’. They LOVE the beach. If you even say the word, they go crazy… “ME! ME! ME DOES!!!” N&E were set on getting in the water too, so it was going to happen one way or the other. Our plans had changed now. Remember we were supposed to go for a walk, then eat and let N&E take a quick splash. Now this was just a beach trip… which I had not packed (or dressed) for. The only ones in bathing suits were N&E. Fortunately the littles are more interested in the sand than the water.

We ended up staying until after 5:00, and everyone had fun, so it was time well spent. The littles didn’t even notice they had missed their naps, and I think we had all forgotten about our morning 3-hour tour of parked cars. When we got back into the car to head home Noah actually asked if we were just going to get something to eat and if we were going to go right back. They just ‘hate’ living in California, lol.

Here are a couple of shots of the ‘less-crowded’ beach. Unfortunately the pics just don’t do it justice. It was insane. 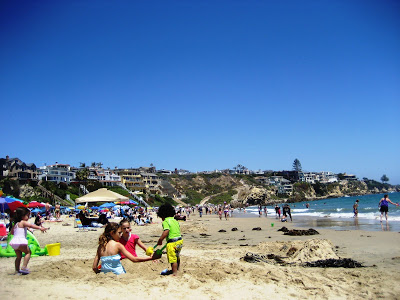 And a few shots of the kiddos playing in the sand… They had a blast. Luke has officially gotten over his fear/dislike of sand, as you will see. They found a ‘hole’ that some other kids had dug, and this kept them entertained for a LONG time. N&E played in the ocean most of the day. I put my feet in once, and the water was ice COLD. I don’t know how they could stand it…. they’re boys. 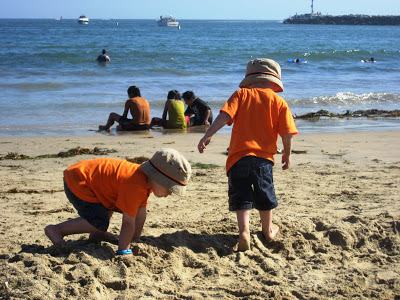 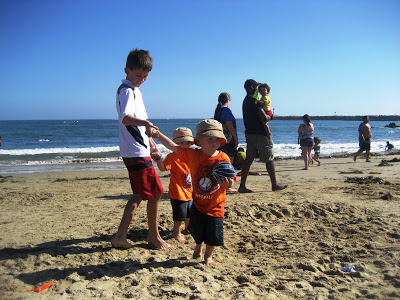 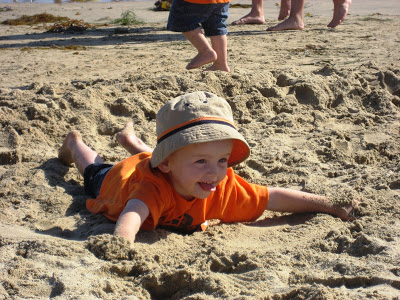 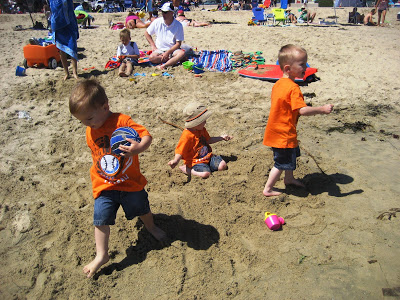 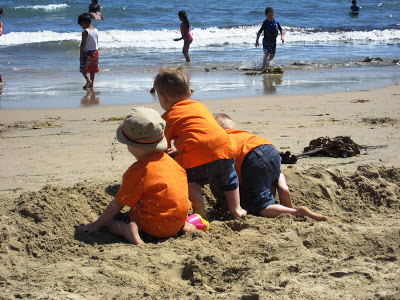 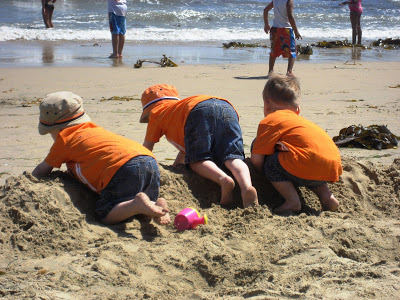 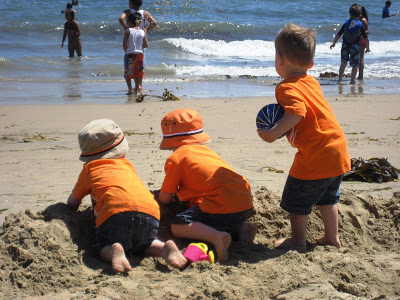 When we were leaving the littles all were shouting “Bye Beach!”. They asked the entire way home “Where’d Beach go???”.
Oh, and today there is sand on the laundry room floor… AGAIN. And we won’t even discuss what my car looks like.

Hope everyone had a great Memorial Day weekend!!!