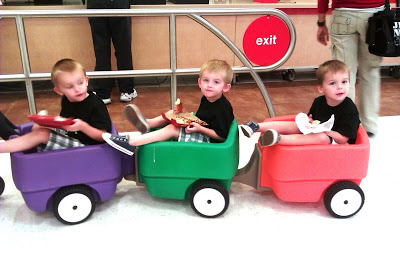 It’s been a crazy week around here.  I might have even considered skipping this week, but E has a birthday party to go to in the morning, and I needed to buy a gift.  (That, and the super-cheap deal on sunscreen… !)

I was a little worried about this particular trip.  First, we got out of the house much later than usual.  These guys are really good first thing in the morning, but today it was almost lunch time.  Second, today the choo choo wagon was in the car instead of the Peg.  I’ve got the stroller-pushing-while-pulling-the-cart (with Starbucks in hand), down to a science.  I wasn’t so sure about pushing the cart and pulling the wagon.  It turned out ok… they actually enjoy riding in the wagon.  It’s just harder for me to see what they are doing when they are behind me.  Not necessarily a good thing!!!

Once we picked up three bags of juggling balls from the dollar spot, I headed up to the Target Cafe.  When in doubt, feed them, right?  I ordered 2 cheese pizzas and they were good to go.  The pizza boxes actually make nice travel plates in a pinch!  (I have no idea what possessed them to stick their feet out like this… crazy boys!)

They were pretty good today, believe it or not!  We cruised through the entire store without any major issues.  We had a few sippie cups launched from the wagon, but other than that, no mishaps. (I asked them why they decided to throw the cups, and of course they told me because they were ’empty’ %$*&@#!)

I finally made my way up to the register and began to unload my cart.  I couldn’t help but notice my caboose was extremely quiet… and still.

Poor Aidan… he was so very tired.  So tired, that I had to wake him up to put him into the car.
Well… that is, after I shot this quick video with my phone… I just couldn’t resist!!!
He sat up somewhere between the exit and the car… but never work up.  (Yes, I know the video is sideways.  It’s still hilarious!!!)
TGIF!!!