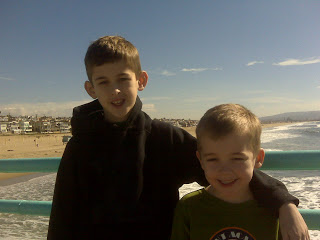 Remember that vacation I was talking about? Things have been so crazy the last several days, we were in no way prepared or organized. We hadn’t secured a place to board the dogs, Aidan is going to the burn center every day, yada, yada. This is the last week Noah & Eli are out of school, and they have been dying to go to Lego Land. After much debate, yesterday afternoon Matt loaded up the car and drove Noah & Eli to California. I don’t think they were gone 5 minutes before I started missing them. This is good for them though. They need some one-on-one time with their daddy. These are probably 2 of the most spoiled children known to mankind, but they have had a rough couple of years. They haven’t really found any friends to play with here in Vegas, and the babies do keep us house-bound more often than not. It is just not logistically feasible to run out to the movies, or even the grocery store like we used to. Moving 3 times in the last 4 years hasn’t done them any favors. They’re good boys… just crave stability, and who doesn’t? Here’s a picture Matt took of them this morning. They are having a blast!

And last night…. after the long drive, and hour wait in the hotel lobby waiting on the room….

Last night the house was unusually quiet. I unfortunately got used to Matt being away while we waited on our house in Texas to sell. However, I’m not used to my big boys being gone. I swear the hour between the time the babies went to bed and when American Idol came on was the longest one ever! (I have lots of favorites this season so far, but am fond of the guy that looks like Robert Downey Jr….). I do miss them! Today was a better day. Aidan joined me in my bed somewhere between 4:30 and 5:00 this morning. He went back to sleep until Luke woke up at 6:00. Trust me, once Luke is up, the day starts. The 3 of us marched downstairs to the playroom, while precious Liam slept. (Matt & I joke all the time that we love Liam the best, for this very reason!). I made a couple of bottles and we watched Jack’s Big Music Show…. twice. Liam woke up around 7, just in time for breakfast. While they were eating, I called the burn center to find out what time Aidan could be seen to get his bandages changed. He definitely needed them changed. The poor guy has been gnawing on them like a dog. He literally puts his thumb in his mouth and tries to pull them off like a glove. Our appointment was set for 3:00, so we were able to keep our morning nap schedule. I made sure to go outside and make sure the Suburban was going to start during nap time. Matt took Aidan early yesterday morning, in his car, so it hadn’t been started since Monday. Call me paranoid. Did I mention that Matt got another registration ticket on his way (in the other car)??? So much for catching a break… but I digress. I loaded the car up at 2:00 because I knew there would be traffic. We checked in at 3:02. The paparazzi was in full force at the hospital today. There are some crazy people with burns out there. Not that we are normal…. but there are some real NUTS out there! Lots of sweet, but curious people too. I found myself talking non-stop the full hour we had to wait… and not to the babies!!! One guy was completely obsessed with our stroller, and was telling the entire waiting room to check it out. Of course I was asked about the octuplet woman… 3 or 4 times. I honestly didn’t mind the hoop-la today. I’m sure I was talking 90 to nothing myself, given I hadn’t had any adult conversation in 24 hours. (I do this to Matt most nights when he gets home from work too.) We finally got called back. I can’t believe they make babies wait so long. What are they thinking? Poor Aidan was so restless the nurse had to wrestle us to get him bandaged. Liam & Luke stayed in the stroller, but were pulling the sheet off the table. It was a 3-ring circus. The other nurses all had to come and see our act as well. One of them brought them each a stuffed rose that plays music when you squeeze them…. 2 pink, one red… velvet! These are true Vegas prizes. They’re a little more than a foot long. The pink ones play ‘The Rose’ and the red one plays “Fly me to the Moon’. It was a good distraction, if nothing else. I’ve got to post a picture of this so you get the full effect… 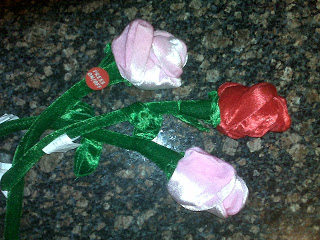 We were out of there at 4:30, and of course we are swarmed in the waiting room once again by a new group of people. One guy literally ran up to me and asked me if we ‘did in vitro’. Who asks that??? I said ‘yes, but we only put in 2’. (Why I feel like I have to justify only putting in 2 embryos is ridiculous, but it’s a hot topic right now with the psycho octuplet woman ordeal.) He immediately grabbed a baby girl from a nearby stroller, held her up in the air, and gleefully announced “She’s in vitro”! He was really a proud daddy and it made me smile to see how giddy he was. I’ll keep him in the normal group of people I hung out with today. It was almost 5:30 when we got home so the evening went by really fast. The babies had cheeseburgers & fries for dinner since it was late and I desperately needed a fountain Diet Coke. They were in bed by 7…. leaving me an hour to Blog and check Facebook before my 2-hour Idol event. We’ll start all over again tomorrow!