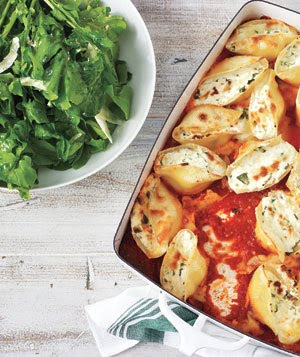 This is a quick and easy weeknight meal idea! I made it last night, but only I used 1/2 the ricotta called for in the recipe. Stuffed shells are typically too rich for me, but I found using 1/2 the ricotta worked perfectly for my palette! (I also probably went a little heavier on the spinach since I just eye-balled it.)

Set an oven rack to the highest position and heat oven to 400° F. Cook the pasta according to the package directions; drain and run under cold water until cool.
Spread the marinara sauce in the bottom of a large broiler proof baking dish.
In a bowl, combine the ricotta, spinach, Parmesan, ½ teaspoon salt, and ¼ teaspoon pepper.
Spoon the mixture into the shells and place them on top of the sauce. Sprinkle with the mozzarella and bake until the shells are heated through, 10 to 12 minutes.
Increase heat to broil. Broil the shells until the cheese begins to brown, 2 to 5 minutes.

Tip: Supercharge these shells by adding extra vegetables. Chop up mushrooms, cooked green beans, broccoli, or asparagus and fold them into the ricotta mixture along with the spinach!