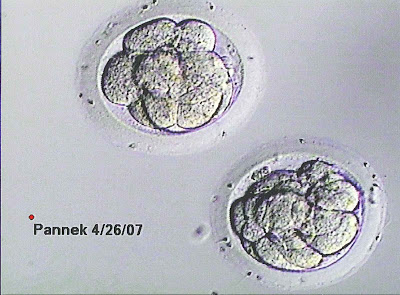 Those of you that know us personally (or if you have watched our 1st year video) know that we 1) did IVF, and 2) only put back 2 embryos, and 3) never in our WILDEST dreams expected to get pregnant with triplets!!! Well, here we are with 16-month old toddlers, still wondering how this happened.
My OB, as well as my perinatologist told us that one of the embryos most likely split, so we were having a set of identical twins and a fraternal triplet (a pair & a spare, as some say). We had 3 separate placentas and 3 separate sacs, so that means they would have split really early (like day 3… which was the day we did the transfer). If you look at the picture of our embryos… you can see that one seems to have divided more than the other. Maybe???

When we were pregnant, my perinatologist assumed baby B (Aidan) and baby C (Liam) were the identicals, based on the location of the placentas. When they were born, we thought baby A (Luke) and baby B (Aidan) were the identicals. Liam looked very different at birth. For one, he had very little hair (no change there!). The hair that he did have was so much lighter than his brothers. He was actually the prettiest one… if I can say that. As they have gotten older, it is very clear that Aidan & Liam are NOT identical. Aidan is all his own. He is built completely different than the other two…. his hair, and coloring in general, is darker…. he is almost a clone of Eli. Luke & Liam are starting to look more & more alike, but Liam is still a little short in the hair department, and Luke’s little head is still not perfectly rounded out yet from his torticollis, despite his helmet (getting better though). I have some people look at them and tell me how funny it is that they all look completely different. At the same time, I run into others that instantly say “2 identicals & a fraternal”. We attract a LOT of attention every time we go out, and the question of “are they identical” comes up EVERY time. Rather than trying to explain the complications of genetics and baby-making to complete strangers, I would just assume solve the mystery.
The only way to know for sure is to do a DNA test. So…. this morning I swabbed 3 pairs of little cheeks, along with mine & Matt’s and mailed them off to a lab in Florida.

After reading the literature, it seems they have found more and more instances of ‘semi-identical’ twins. What the heck is that??? Apparently when 2 “guys” fertilize one “egg” and subsequently split, they are semi-identical….. each twin would have identical maternal DNA, but unique paternal DNA. HUH? Maybe this is what happened? The only other option is that my IVF doctor missed a follicle and we conceived a 3rd baby on our own….. I guess we will wait for the results!
These are the 2 that I am guessing are identical (or semi-identical?). Baby A (Luke) and Baby C (Liam). 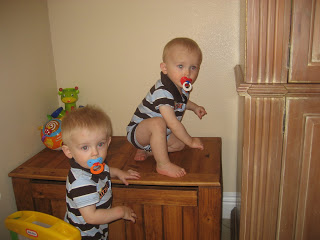 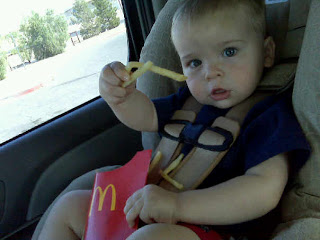 Care to take a guess??? Check back in a week or so for our moment of truth!